Because his mother was a wafer so long.

I went on an oat kick and decided that I needed oatmeal cookies.

So I made them. I figured, they’re quick and easy and get the craving for something sweet taken care of. I had plans this past weekend to jump onto a tall ship that I used to work on for a few days, and figured that cookies would be a great portable treat. And, being a former crew member, I know just how much tall ship crew sometimes need a bit of sweet. It’s those little homemade touches that we sometimes miss, living and crewing a boat.

Speaking of the boat, if anyone in the CT area is looking for an awesome way to spend an afternoon, or to take an unusual vacation, check out the Mystic Whaler. She does brunch, lunch, and dinner cruises, as well as 3 to 5 day sails. It’s awesome. No, I’m not paid to say that, it’s just that awesome. Good food, great experiences, new friends. You can’t go wrong. And look at her!

Anyway, back to the boat cookies. Today’s recipe comes from the Flour cookbook. They aren’t my regular go-to, but I wanted to try something different, and I’ve made some delicious sweets from the book before.

Of course, I changed the recipe slightly…because why not. I upped the cinnamon for one,  and added vanilla, and some other little things here and there.

I know I haven’t said it in a while, but it’s still as true as ever…I love oatmeal. All ways. I have moved away from it of late; but I’ve come to realize that it’s been TOO long. Last week I had such an intense craving for oatmeal that I broke down and bought some while I was out! It wasn’t great…but it was exactly what I needed. And I’m pretty sure I’ve eaten it every day since….and not even fancy. It has just been a bowl of oats that I cooked. That’s it. No milk. No sugar. No fruit or nuts. Just. Oatmeal. Plain.

I know. Talk about hardcore.

This morning, with the lovely break in the hot and steamy weather, I broke out the oatmeal and decided to make something savory and wonderful. 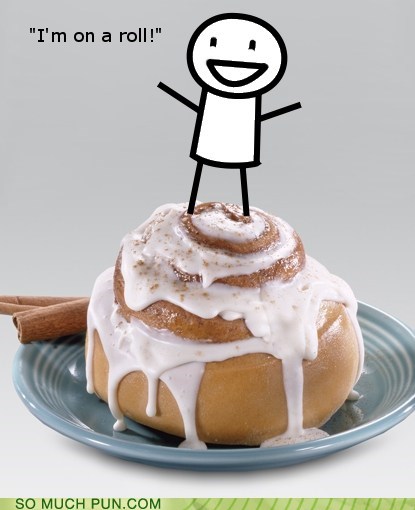 That picture is a bit deceptive. I’m not really making cinnamon buns this week. I wanted to, but my conscience got the better of me. So, I’m doing a swap: Cinnamon Bun Baked Oatmeal! All the flavor of cinnamon buns, without all the fat and bad stuff. Don’t you just love me?

No? Well, you will after the grumbling dies down.

After dropping the ball last week and not updating, I knew I absolutely HAD to do something today. Last week was filled with 3 separate attempts at recipes which all failed. Hence, no update. And a lot of Molly grumbling.

But today, I wanted to do something delicious. I’ve been craving something sweet, and I haven’t satisfied it yet, so I’m hoping this will do the trick. And we all know I love oatmeal. By all accounts, this recipe should be an epic win.

I’ve adapted it from Chocolate Covered Katie. She has some great stuff. So, check her out! Now, on to the oatmeal!

I often cook for just myself…you wouldn’t know it by the sheer yield of food I make, but it’s true. This recipe is awesome because it IS just for one. Well, it says it is. I’m pretty sure you can break it into two servings. But, that is your prerogative. And…it’s not so much a ‘bun’, as it is a loaf. Whatever shape you bake your creation in is up to you.

I topped mine with 2 tsp maple syrup and 1 tsp of coconut oil. Delicious. Mmmmmm. It’s got a slight tang from the greek yogurt, it’s chewy, soft, a little crunchy….heaven.

Let me know what you think!